Happy Birthday to us

Three years ago today we received that precious and long-awaited email from the Charity Commission confirming that the i's were dotted and t's crossed well enough to consider us a lawful charity. At that point, we had no official role models, no official staff, no offices, no money and had a grand tally of exactly zero workshops and no proof that what we were setting out to do even works. I remember our very first workshop just days before we launched in the House of Commons; Charlie Condou and I nervously delivered five workshops to curious students at Holloway School. When Charlie explained that he has children with his partner Cameron and co-parent/friend Katherine, one of the students asked if his wife minded him sleeping with another man. Over the years we've had many funny questions like this, many misunderstandings and many light bulb moments. By giving young people a chance to ask funny questions and clarify those misunderstandings in a positive environment, we give them an opportunity to think critically about their attitudes to sexuality, gender and particularly to those who might come across as 'different'.

For the young LGBT people in the workshops, while the actual experience might be difficult to sit through as it draws attention to the very thing they are often trying to deny or hide, it gives them hope that life as an adult will be just fine. Our role models are positive, confident people who lead happy lives - we want all young people to believe that no matter how difficult life might be at school, there is a. always someone to talk to about it and b. a whole world of opportunity waiting for them. But even more importantly, the students who aren't LGBT (the majority of the school population), have an enlightening experience in which they speak to funny, kind, interesting people whose sexual orientation or gender identity aren't the most important thing about them. They are just people. People with whom students can connect and have empathy for. To speak of love, rather than 'homosexuality', and all its loaded associations, presents a common language to which all human beings can relate.

One really important learning point for us over the last three years has been around the expected clash between faith and sexuality. It hasn't arisen. We've worked in many faith schools, institutions with a very high Muslim population, Church of England primary schools and across the board the reaction is the same from young people of faith and young people who don't follow a set religion. They are curious, intelligent, giggly, embarrassed, self-conscious, loud, funny, humbling, warm and above all, willing to learn. The often ill-constructed pillars of prejudice crumble away when faced with human connection and an opportunity to understand our similarities, rather than focus on our differences.

Some of the greatest impact we see is through the involvement of transgender role models. The workshops in which they present their stories are both touching and educational for students, teachers, facilitators and fellow role models alike. Whilst LGB people might be more used to outing themselves, my transgender friends say they often don't want to come out - they are now living their lives as they wish and don't want to re-visit times past. In a recent workshop in Liverpool a transgender role model told her story and the facilitator was moved to tears, watching the students and teacher's eyes well up as they empathised with a particularly moving account of this role model's life. Empathy and connection; the antitheses of hatred and prejudice.

Aside from the incredible impact on young people this programme has had over the last few years, I've been moved to see the comradery, passion and energy from DRM volunteers. People who have believed so vehemently in using their influence to bring about social change, whether by fundraising, baring their souls as role models or by being the guiding hand on the ship in the form of trusteeship. None of this would've happened without you, and as young people often don't feel confident to thank adults, particularly vulnerable young people, I want to say thank you on behalf of the 10,000 young people we've now spoken to. Without doubt, this thank you is extended to the quickly growing and highly motivated staff team. If we've helped just one young person to stop thinking they are less than or one young person stop bullying the kid who doesn't like football, it's all been worth it. 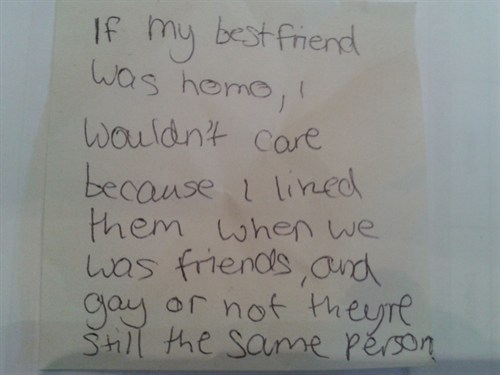 Happy birthday to all of you, no matter when you became part of the DReaM team; collectively, we're making a difference.