Let’s make our #LGBTFuture a reality

We’ve come a long way. If there’s one thing that’s clear to me every LGBT History Month it’s this. From decriminalisation in 1967, right up to last year’s first same-sex marriages, the march for LGBT equality in the UK has been remarkable.

But for all that we have to celebrate - and there clearly is a lot to celebrate - there’s still so much work to do. Homosexuality remains illegal in about 80 countries throughout the world. Transgender men and women are killed nearly every two days, just for expressing who they truly are. And of course, our young people use and are surrounded by homophobic, biphobic and transphobic language on a daily basis.

I believe in a better world. One where no-one faces discrimination because of their actual or perceived sexuality or gender identity. One where our young people no longer feel that they have to conform to gender stereotypes for fear of being called ‘gay’. One where every LGBT young person can live a life as full of love as they deserve.

In almost a year’s time, I’ll be doing something I never could have imagined during the many years as a teenager when I struggled to accept my sexuality. I will be walking down the aisle and marrying the man that I love, the man with whom I’ve already spent eight happy years.

And as our wedding plan is getting underway, it’s really sharpened my awareness of everything that’s been achieved by the brave men and women who came before me. They stood up for what they believed in, for what they knew was right. And as a result, we live in a world that’s more accepting and inclusive than ever before.

I’m proud of all that we do at DRM to make tomorrow even better for our LGBT young people. Together we can make our #LGBTFuture a reality.

We’d love to hear what your #LGBTFuture is. Just write it down, take a picture and send it to us through our Facebook page or on Twitter. We’ll be sharing the best throughout the week as we celebrate the end of LGBT History Month 2015. 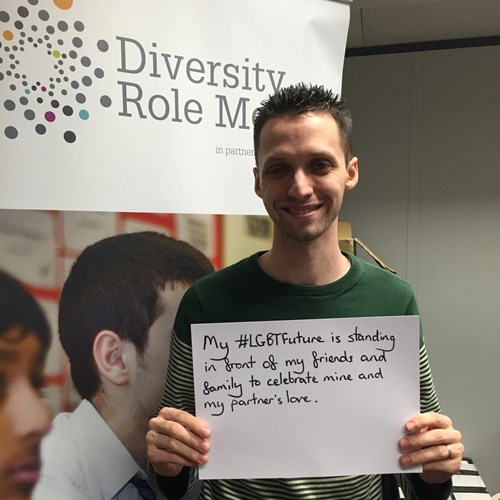