I was 3 years old when Section 28 was first introduced so had no understanding of the impact it would have on me later on in my teens.

As the story that I share in schools begins, I was about 14 when I had my first open relationship with another girl but prior to that there had been a lot of self reflection and soul searching on the unknown feelings I was having. As one of the 'performer' types at school I spent a lot of time in the Dance and Drama Department. Now, 16 years on, I know for sure that my Drama teacher was a Lesbian. Back then I also 'knew' but conversations I wanted to have with her about my own feelings were unable to be had because of Section 28 and what it could mean for her.

When I was bullied by others I had no support or help from staff within school as anything related to a person’s sexuality was brushed aside and ignored. In Science and Citizenship lessons when talking about relationships or sex I felt alienated, outcast and had to go to magazines or watch TV late at night to try and understand what I needed to know. Luckily, I did find support from two sixth formers who became my 'go to' for advice and support. They were my role models.

Jump forward to 2005/6 and I am doing my PGCE in Liverpool. Although Section 28 had been repealed for 2yrs by this point there was little or no training given on tackling homophobia/transphobia in schools. Many teachers in schools still refuse to talk about sexuality and gender identity, even now, for fear created by Section 28.

It is for this reason that, when I finally came to terms with my own sexuality in 2007, I didn't just 'come out' to my close friends and family but I also did it in a whole school assembly so that pupils knew they had someone to talk to if they wanted to, and, as the attached letter from an ex-pupil shows - it made a difference! 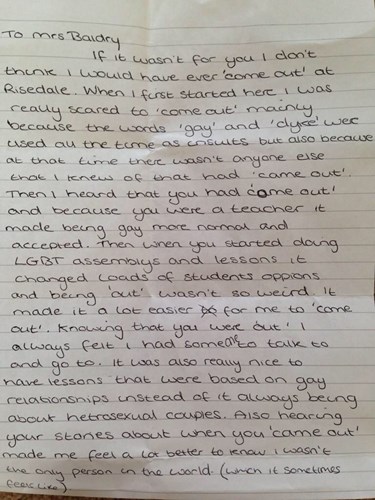