After speaking at a staff meeting on the importance of including LGBT topics in primary schools, I was invited to spend a day in one discussing different families. It was a timely reminder, in amongst all the charity red tape & future fundraising, as to how worthwhile all this is.

I visited four classes ranging in age from 6 to 11. The youngest students read 'Spacegirl Pukes' and looked at photos of different families, including same sex couples with children - they concluded that your family are 'the ones that clean up your sick and buy your clothes'. They didn't think the gender of the parents mattered. With the older classes I talked about being adopted and having two mums and two dads and six siblings; they were fascinated by this and asked both challenging and cute questions (which parents do I like more? Was I ever naughty because they weren't my real parents?). One class of ten year olds tried to guess whether I was lesbian, gay, bisexual, transgender or straight. After questioning me about my hobbies and what sports I like, the vote was inconclusive (we used First Past the Post to keep it simple…). I told them I am a lesbian and that it is neither an insult, nor something to feel proud of, no more so than having blue eyes or blonde hair. None of the kids were shocked, they didn't even giggle when anybody said the words 'gay, lesbian or transgender'; they just accepted it and wanted to know more about my life.

It's such an easy way to help children understand that being LGBT is just different and not worth getting worked up about; if primary school kids have honest discussions with real people at that age, our work in secondary schools would be so much easier. Even the tough boys agreed that two men who love each other should be allowed to walk down the street holding hands, just the same as anyone else. Such a heart warming experience and it moved me to tears. 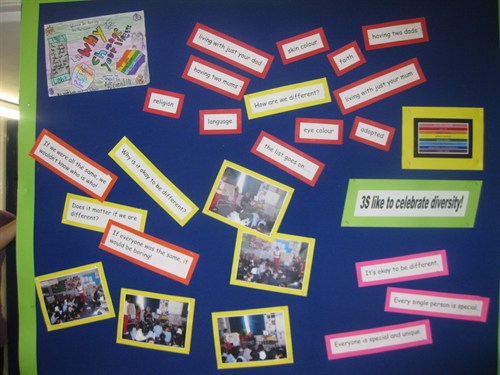 The children's preconception of LGBT

Before I came into class as the 'adopted lesbian', the children not only learned what LGB and T stand for and how to pronounce them, but they wrote down and spoke of some of their perceptions of LGBT people. I want to share some of these gems with you:

And my personal favourite:

"lesbians could have any job they wanted (if they worked hard in school and embraced all possibilities). Maybe a hairdresser"

If you are imagining a middle class, houmous-and-carrots-for-lunch, Montessori school, think again. This is a typical inner city, low socio-economic, multi ethnic school. One 7 year old spoke openly about his uncle beating up a man just for being gay. And a teacher was resistant to my presence as none of her students have LGBT families and she thought we were just 'encouraging it'. So it's not all plain sailing. However, with perseverance, we at least present a different point of view and allow children to make an educated decision as to whether to be accepting. My challenge to those moving onto high school was to stand up against homophobic, or in fact any, bullying, when they see it. Being adopted, being LGBT, having a particular talent or a disability are just differences and for that, the world is a richer place.