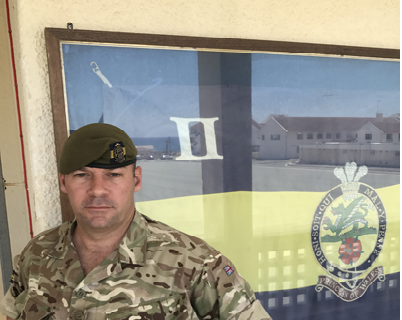 Tell us a bit about yourself. What is your job?

I am a Sergeant in the Infantry; I am currently working as a Mechanical Transport Platoon Sergeant having just left a role in Intelligence. I am also the unit representative in Counter Chemical, Biological, Radiological and Nuclear Warfare

Did you have any role models growing up?

Growing up, both of my parents were my role models, both very strong willed and influential people. My mother raised my sister and myself almost single headedly whilst my father worked abroad. To her I owe my strength of commitment. My father sacrificed a lot in his own life to provide for us and I owe all of my work ethic to him.

How important do you think it is to have visible role models within the workplace?

I think in the modern world it is essential to have a role model to look up to, if not to aspire to be, someone to represent what can be achieved in all diversities and represent the ability of all walks of life.

What are you most proud of?

I am proud of many things in my life but most of all would have to be creating the LGBT Veterans Ball. An informal celebration of the path veterans of the Armed Forces forged for the current generation and the ability to freely be ourselves. Seeing some of the Veterans overcome their own stigma and ill feeling towards the Armed Forces for the treatment they received and seeing the pride in themselves for the future they created.

What is one thing you wish you knew when you were younger?

It’s going to get harder than you’ve ever imagined, you are going to go through hell and back many times before you are happy and comfortable in life, in your own skin; HOWEVER… You will absolutely kill it, you will find strength in yourself you never knew you had and you will achieve more than you ever thought possible! There will be hundreds of people who will positively touch your life and more importantly you will positively affect hundreds more! YOU CAN DO ANYTHING YOU WANT TO!

What is on your bookshelf?

Embarrassingly I don’t have a bookshelf…. However there are two books I always come back to; “The Monkey House” about the siege of Sarajevo during the Bosnian war. Whilst the war in itself is a true tragedy of modern European times, it shows that in the darkest and most despaired moments in our life, there is always room for success and hope. Also “Etiquette for Outlaws” a satirical look at life and how to actually be a really nice and rounded human being whilst being tough, strong and a “Badass”!!

I never really considered having a bucket list until recently, my younger sister was diagnosed with terminal cancer and you suddenly realise that life can be taken from us in the blink of an eye. My current bucket list reads “Help Verity and her family achieve their bucket list” if I can do that then I would feel I had completed all I could ever need to in life.

So what do you do for fun?

I am a simple person of simple needs so I enjoy spending time with my family and friends, I could have more fun in an hour with my children than I could in a day at a waterpark.

Dinner Party: Who would you invite?

Alan Turing, Matthew Shepard, Harvey Milk and Marsha P. Johnson. A collection of the people who, in my mind, have shaped the worlds awareness of LGBT rights and to show them that despite their own horrendous experiences, they can be so proud of the things they have achieved despite never getting to see the results.

How would you describe yourself in FIVE words?

Is there anything else you would like to add?

Stealing a quote from an American campaign “It DOES get better”