Reflections on the journeys of empire. 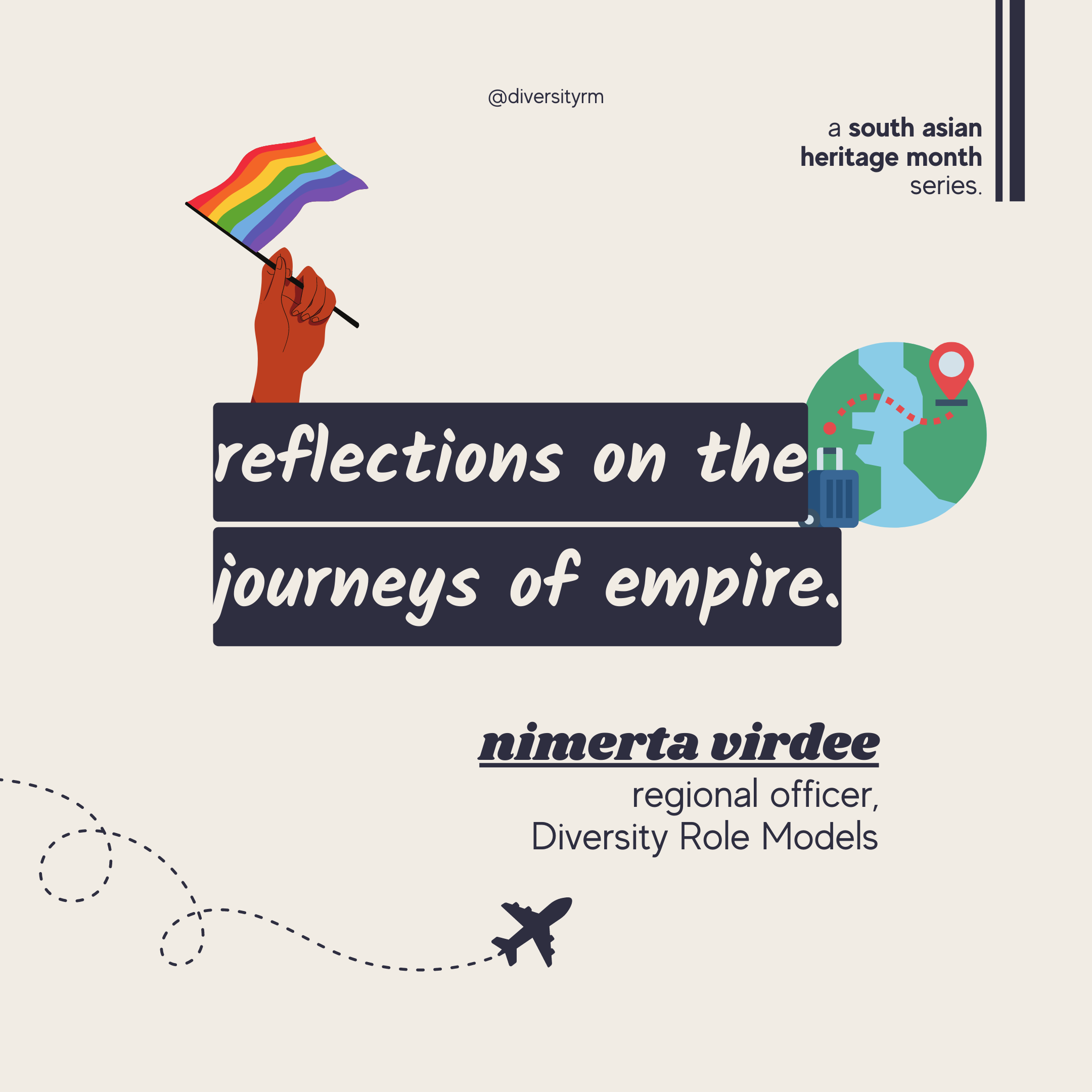 This year’s South Asian Heritage month theme hits close to home for me. My very being in this world, is a direct result of separate journeys taken by my grandparents and parents on both sides of my family, which were journeys shaped by Empire. It’s a story that makes that age-old question, “where are you from”, slightly trickier to answer.

I am a British Indian, first generation, which means my parents were born overseas but me, my brother and my cousins were all born and raised in the UK. My father’s family were north Indian farmers from the Punjab. They moved to the UK in 1963 when the British government were inviting workers from the commonwealth to settle in the UK. This is a story echoed by many and is particularly reminiscent of the stories of the Windrush generation who came to the UK on invitation from Caribbean countries, at roughly the same time.

A lesser told story is one from my mum. My mother’s family, who were ethnically Indian, Punjabi, lived for generations in Burma, now Myanmar. Much like India, Burma was once a country held under the British Empire and this is why my mum’s family found themselves living there. My knowledge of the exact history of this time is shaky because this isn’t something we learn about at school in the UK.

What I have understood is that Burma gained independence from the British in 1948, just a year before my mum was born. In the wake of independence there was growing political extremism in the country. This led to an increase in tension and anti-Indian feelings within the general population. When my mum was 10, my family had to flee or face persecution on the grounds of their Indian ethnicity, initially settling back in India. The Burmese military leaders seized all privately-owned business and my family were left penniless refugees. To find work and a new life my grandfather then made the big decision to relocate our family to Ealing, West London in 1967 where they settled and many family members still remain today.

Growing up as a British Indian, was both exciting and colourful and was a wonderful mish-mash of the best of both cultures. I would often talk with pride at school about how my family lit divas (lamps) on Diwali or how my Aunt made the most delicious spicy roast lamb at Christmas. But it is also fraught with confusion and the tendency to be stereotyped and misunderstood. Working for Diversity Role Models has helped me to see the power of storytelling, not only in helping to strengthen those bridges between us in a diverse community, but in helping us understand ourselves and our heritage better. But some stories are painful for our elders to recount. The impact of empire and the tensions it created has meant that British South Asians don’t always have the full story they need. For many of us, answering that question, “where are you from?” isn’t always going to be the simple answer you might expect.

One of the best parts of my job at Diversity Role Models, is hearing stories from all of our fantastic volunteer Role Models and in particular, I have gained a lot from hearing from our South Asian Role Models. These volunteers share similarities with my experience but also helped to fill in some of the gaps in my understanding of South Asian heritage. Growing up, the concept of being LGBT+ and South Asian was completely alien to me. It was never spoken about at home, certainly never in a positive or even neutral way. I always felt that anti-LGBT+ ideas was something that was inherent in South Asian culture. Later, I have understood how much of this is a legacy of empires and rulers that brought their values, ideas and laws with them. In the west we have moved away from some of the outdated anti-LGBT+ legislation, but this history has left an unfortunate mark on many countries in the commonwealth that previously were much more welcoming to LGBT+ communities.

One of our Role Models from the North East hub of our charity, Vivek Nityananda, a scientist and researcher at Newcastle University, helps to share a piece of insight from British Colonial history in India in his story below:

“I grew up in Bengaluru (previously Bangalore), India. Growing up, I barely heard the word 'gay' or knew what it meant. Section 377, a law from British colonial times, criminalised being gay and there were no role models or representation in the media. It was only during my PhD that I met anyone who was openly gay. It still took me a while to come out, first to myself and then to friends and family. I've been lucky that people were loving and supportive when I did. Connecting with the LGBT+ community in Bengaluru gave me confidence and I have fond memories of our time organising the first Pride in the city, protesting against the law. Section 377 itself was taken down, then reinstated, and was finally decriminalized only in 2019.

I moved to the UK in 2010 and met my husband here. I've been living in Newcastle since 2013, when I joined Newcastle University as a researcher. I research insect vision and decision making, trying to figure out what their unique solutions are for the sensory and ecological problems they face. I'm also interested in researching the benefits of self-deception and overconfidence. I've always found Newcastle in particular and the North-East more generally to be very welcoming. My husband and I have never felt threatened in the region, despite our public displays of affection.”

The last part of Vivek’s story, about his positive experiences of living in the Newcastle as an openly gay immigrant to the UK, echoes my own positive experiences of moving up to the North East from London four years ago. Although I haven’t moved countries I have done my own smaller migration journey within the UK. Having grown up and lived in London all my life, my partner and I moved to the North East to find a better work-life balance and a cheaper cost of living. What we also found was a wonderful community, filled with diversity, its own connection with empire through its deep industrial history and above all, a strong sense of social justice that makes running the North East hub of DRM an absolute delight.