“School, the happiest days of your life,” or so it goes. Who actually said that? I’m guessing it was someone wearing rose tinted glasses, because no matter how hard I try, I’ve always seen my secondary school life as miserable.

I went to an all-boys grammar school, one of those very old, very traditional ones with photos and plaques on every wall dripping with history of past successes. My school loved sports and churned out county players, even England players in Hockey, Cricket and ‘Rugger’. It was an academic place where we focussed on passing exams, and fair’s fair, I came out with seven good GCSEs.

I couldn’t wait to escape

But that’s pretty much all I got out of it and, at 16, I couldn’t wait to escape. Those early teen years were a struggle for me. I’d gone from a small junior school with a mixture of friends that lived by me, played with me and were care free like me, to this huge, crumbling, wood-panelled institution that made me feel that the only success that mattered was on the field or an exam paper.

I was an unsure kid back then, some 25 years ago. None of my friends had come with my from junior school, I was overweight and didn’t fit in. I didn’t know I was transgender then, that word hadn’t even been invented had it? It was 1987 after all. But I knew I wasn’t into rugby and I was too slow for cross country. I even got hit by a hockey stick and had to get my eye stitched once, but I just had to get on with it.

There was no sympathy. I had friends, but they were into girls, clothes and, later on, going to raves, and it didn’t seem like me. So I spent a lot of time on my own. Being the fattest kid in the year, or maybe the school, meant I got used to laughing at myself. Before anyone else got in first. I had to. It was survival. There wasn’t a day went by, when I didn't wish I was at another school.

Here and now, my life has moved on.

I’m a successful, happy, confident woman who happens to be transgender. So when I got an opportunity, through DRM, to go to my old school to talk to teachers I jumped at it. Walking up to the gates, I felt more unsettled than I’d imagined I would, all those old feelings came flooding back. The playground looked the same, but on the fields, there were new astro turf pitches, a new music block. Signs of progress. It was the start of the day, so kids were buzzing round on their way to lessons, filled with so much energy.

I was helping facilitate a training day for teachers, so I introduced myself, and revelled in telling them I was an ex-pupil. I think they assumed I’d just been in sixth form where girls were allowed, but when I gave them my dates I’d attended, it dawned on them that I had been assigned male at birth. None of my old teachers were there and it was fascinating listening to when and where they’d moved on.

Talking to staff about how diversity and inclusivity are now being promoted was re-assuring and it was cathartic to talk about how I’d felt all those years ago and how I still feel for that insecure little boy. I spoke to a Deputy Head, a Safeguarding Lead, school nurse and teachers and they really engaged with what DRM are striving for. Later that day, I was shown around the school, getting glimpses in to my past, wondering the corridors.

Some of it was still crumbling, my economics class is now a sixth form common room, but it all seems a life time ago. There were Stonewall posters on the walls, declaring “Gay OK”, and it made me smile. What would my school days have been like if I’d seen that, I wondered? Maybe, I would have come out when I was 13 and not 35.

When I passed by the school photo of 1990, still hanging there on a corridor wall and found my 16 year-old face, staring back at me, amongst 900 boys. It reminded me how much young people have to cope with and the impact those experiences have on adult life. And that’s why I support DRM. 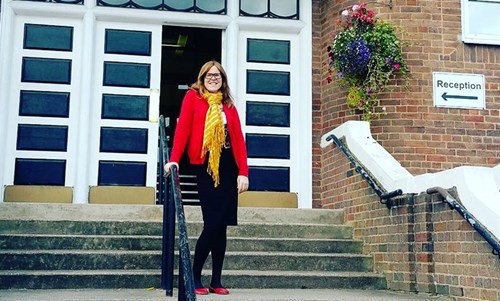